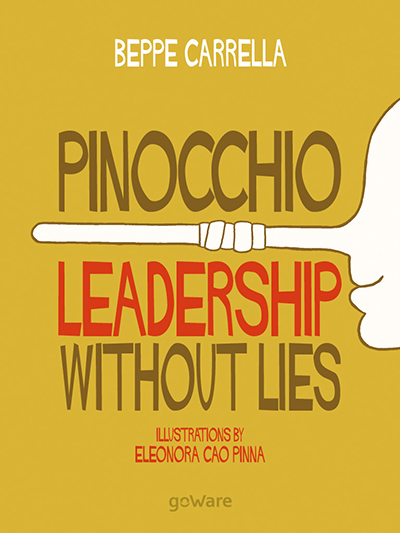 What should Pinocchio, king of liars, teach us about leadership? What does lying mean? What leader would candidly admit, to telling a lot of lies of their own free will? Leadership is made of and is told through stories about great universal values which, however, we prove to lack in our communal everyday life. There are way too many omissions in these stories. True leadership is a whole different thing. Carrella’s is a journey through the truth in the lies set to music, to wild rock and songs that sound like poetry and poetry that sounds like songs. A breathtaking narration. There is no winking at the readers, no attempt to earn their favor. It is hard like only rock can be. Like only true stories are. Every passage a song, a memory, a tiny dot, a tale of business history. Songs, literary works, comics, documentaries, videos are used to portray a most original variation of Pinocchio the hero, looking for freedom through disobedience, lies and the confrontation with own his vulnerability. Which might just be the path of the leader: saying only what other people want you to say. Ultimately, then, Pinocchio the puppet is the one who tells less lies of all.

Beppe Carrella, who grew up as a manager in the ict world and has been the ceo of several companies in the ict industry both in Italy and abroad, is the founder of bclab and has held a position as professor in both Italian and foreign universities. In 2013, his first book Provocative Thoughts was deemed to be among the ten most important works on the subject of human resources by prestigious American magazine hr.com.