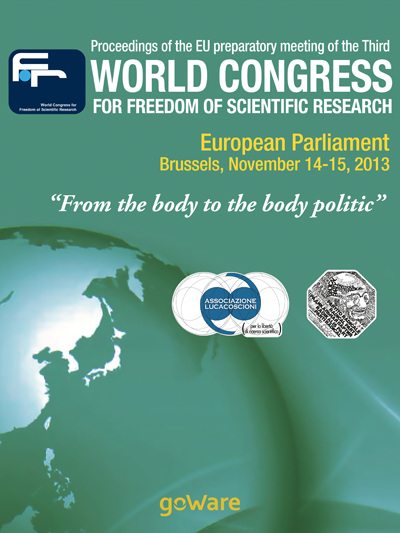 “For nearly ten years now Luca Coscioni Association through and together with the World Congress has been fighting for freedom of scientific research. The World Congress is not a place of mere convention and intellectual debate: it is also the seat of political initiative where scientists, researchers, politicians, sick and disabled people and citizens can work together to address complex issues such as patentability, Open Access and clinical trials, as well as the relationship between science and religion or between science and politics. Marco Pannella, leader of the Nonviolent Radical Party, is to thank for providing the idea for this scheme. It was put together in the weeks when we were beginning to organise a referendum in Italy to abolish the law banning scientific research on embryos. This was not just an Italian issue, but a global one. At that moment in history, we spoke of the danger and threat of all types of fundamentalism – whether religious or ideological – which were opposed to science and to freedom of research. The aim of the meeting that was held in November 14-15, 2013 in Brussels is to identify the urgent need for freedom of research and freedom in the broader, more general sense. This is not to insist so much on the importance of science, research, human well-being, but also to respond – or to find another possible answer – to the problem of the crisis of democracy and the rule of law”.