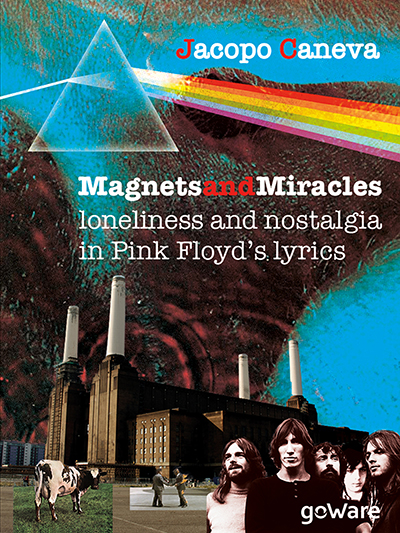 Magnets and miracles. Loneliness and nostalgia in Pink Floyd's lyrics

Following Dieci brani da ascoltare almeno una volta nella vita (“10 songs you should listen to before you die”) and the books on Tim Burton and Hayao Miyazaki, Jacopo Caneva’s latest work carries out a short, but in-depth study on the concepts of loneliness and nostalgia in Pink Floyd’s lyrics, from The Dark Side of the Moon to The Wall. The young writer unveils the common ground of apparently different lyrics: the memory of Syd Barrett, the genius and first leader of the group, the “crazy diamond” who gave the band the name of Pink Floyd, delivering it to myth, disappearing in anonymity after troublesome years. The book is a tribute to the legendary English rock-band and a celebration of the recently released The Endless River, a new album of previously unreleased songs.

Jacopo Caneva was born in Latisana (near the city of Udine), on 29th June 1998, and now he lives in Portogruaro, in the Province of Venice. He is in 3rd year at “Liceo XXV Aprile”, a secondary school focusing on humanities. He also studies harp, harmony and composition. His favourite film directors are Tim Burton, Hayao Miyazaki and Takeshi Kitano; his favourite musicians are Modest Mussorskij, Danny Elfman, Claude Debussy and Joe Hisaishi and he also loves reading the works by Haruki Murakami and Lewis Carroll. When he grows up, he wants to be a film-maker.